It wasn’t like trying to pack our house in Rye before and after the sale, but it did take most of last Saturday to load ourselves into multiple taxis with our suitcases, our guitars, our school supplies and computers, our dog bowls and dog and groceries, and shift over from one side of the Casco Viejo to the other.

We had been looking almost since we arrived for a furnished 3 bedroom in the old center of Sevilla, but the nice ones seemed to be snapped up almost immediately.  We visited a half-dozen not-so-nice apartments — with weird layouts or no kitchen appliances or bad locations or unfortunate renovations — and in each one Ibby, Mimi and Benji would instantly start jockeying for the better room, the larger room, the room with more light.  But none of them fit us until we saw one that was listed on a short-term rental site (a sort of Madrid-Sevilla version of AirBnB).  Brook saw it listed and on a walk-by met the owner, who also lives in the building and also has 2 children at the same international school as the 3 little nuts.  The building intially was part of the neighboring convent, then was used as an industrial building, and now is divided into four “casas.”

The view from the street was promising in an austere way, we thought, even though the block itself is barren of attractions.  Well, except for the archaeological site across the way, which is soon to be built over because the ruins there are only 200 years old and not worth excavating further.  You enter our building through a smaller door in that giant wooden door visible in the photo below, although the giant wooden door itself can also swing open to admit cars or motorbikes. 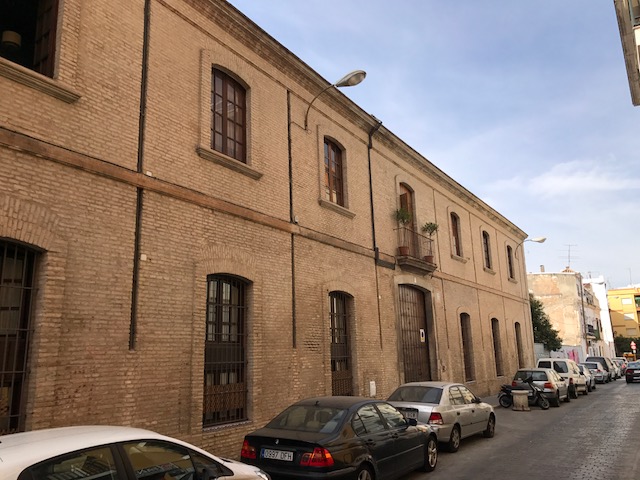 And the view from the doorway shows why Benji refers to this as the “secret garden” apartment.  There’s a patio inside, with stones and square pavers and some lovely trees and some vines growing down the back wall and over the car park.  The patio is bordered on two sides by the casas, on one side by another apartment building, and on the back by what we like to think of as the convent.

Doorway into the secret garden

Looking to the right from inside the entry archway, at our “casa”

The latest renovation retained some industrial feel, with brick walls throughout and polished concrete floors on the main level.  The main level is a single open room, with the kitchen at one end, a living area at the other, and a glass dining table in the middle.  There are stairs up to a roof deck and stairs down to the bedrooms.  We love it!  And so we’re here until next August.

Stella likes it too, especially monitoring the activity in the patio, including the movements of the neighboring beagle.

Main level. On the left side, stairs up to roof and down to bedrooms; on the right, windows to the patio

Stell tracks the comings and goings

On one of our first nights here, coming back from a dinner out and a few blocks from the house, we ran across a very large parade with a marching band and an icon on a float carried by a team of men whose white pants and feet were just visible under the drapery.  In fact, we ran across other men (all in white and with white head scarves) from the first shift, who had been relieved and so were enjoying cervezas and cigarettes at the Plaza de San Leandro.  The second shift was still under the icon; walking slowly and being directed by men in dark suits who talked to them through the drapery.

Oh, and then on Sunday our kind landlords and neighbors gave us floor seats to see Seville’s professional basketball team, Real Betis, play Valencia.  So exciting!

The walk to school is about the same as from Calle Miguel Cid, but across fewer busy streets and so with less risk of death.  And tonight we strolled up to a small park that has a playground encircled by the old city walls.  Walls that were first built up in the time of . . . who was it?  . . . oh yes, Julius Caesar.  The Carthaginian mud and stone walls were improved by the Romans to encircle the old city, and then were torn down and built up over centuries, including by the Moors and the Christians.  Now they are mostly gone, but this playground is still protected. 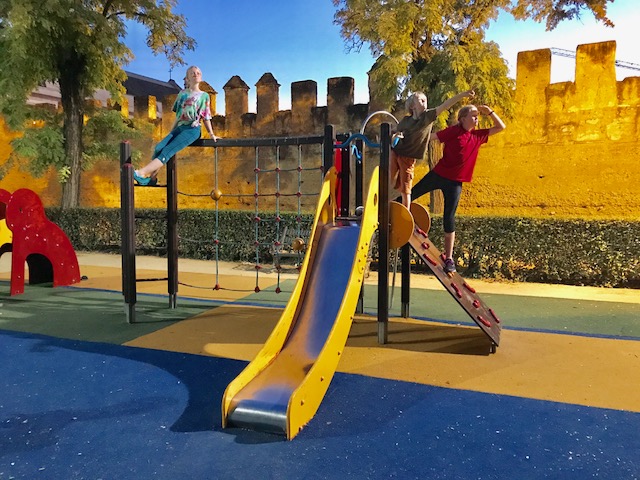 2 thoughts on “Our New Apartment”